Immortalized by Jimmy Page, this custom double neck guitar from Epiphone is a staple when it comes to cool electric guitars. Despite the unconventional design, the EG-1275 still has plenty going for it in the sound department, at least in the right set of hands. With this modified SG, Epiphone combined a twelve string guitar with a six string, resulting in a highly versatile two headed monster. The twelve string portion features dual humbucker pickups while the six string half utilizes open coil pickups, offering the player a wide range of tone to play with.

You can’t have a list of cool electric guitars without touching on the Gibson Flying V Pro, which has become an icon in its own right. True to its name, the Flying V has an angular ‘V’ shaped body, setting it far apart from conventional guitar shapes which tend to be more rounded. The Flying V was first introduced in 1958 but wouldn’t gain a steady following until a few years later when it was embraced by the hard rock and heavy metal community of the late sixties and seventies.

From the first glance, it’s clear that the Gretsch G5445T Double Jet is a unique looking guitar. The body of the Double Jet is large and rounded with double winged tips, while a vintage style Brigsby vibrato arm is housed at the bridge of the guitar. The Double Jet’s distinctive retro-inspired looks are backed up by surprisingly good tone for an entry mid level guitar. There’s definitely a classic quality to it, while the myriad of tone controls contribute to a very versatile sound.

You know you’re dealing with cool electric guitars when Metallica’s James Hetfield is willing to put his name on it. This Signature Snakebyte features a striking contrast with the all white body set against the ebony fretboard. The Signature Snakebyte features an ultra modern, asymmetrical design with jagged angles that is sure to appeal to heavy metal guitarists following in Hetfield’s footsteps. This Snakebyte’s stellar looks (and hefty price tag) are backed up by a huge sound that is well suited for aggressive rock. 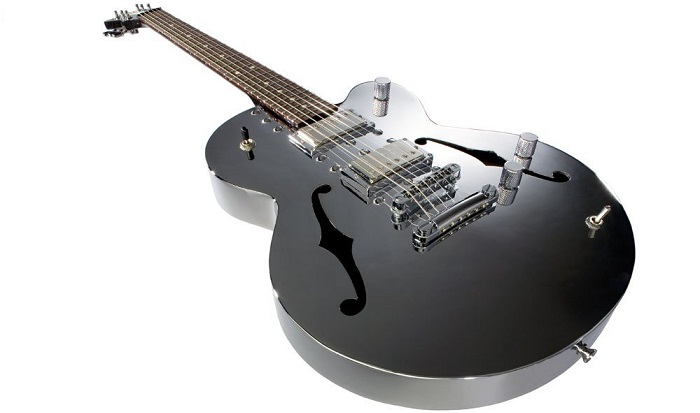 The Normandy Chrome Archtop Guitar is a finely crafted piece of eye candy that is sure to make the mouth of any guitarist water. Featuring an all chrome finish, dark wood fretboard, distinctive f-hole cutouts in the body, and a handful of tone knobs and toggle switches for good measure, the Archtop Guitar is truly a sight to be seen. Of course a pretty guitar isn’t worth much of it doesn’t have the goods in the sound department, and lucky the Archtop delivers in that regard as well. Normandy’s Archtop is capable of producing a wide range of tones, from dulcet plucks to twangy overdriven riffs.

Gibson delivered a highly unique body style with the USA Explorer T, which features a jagged, asymmetrical body shape. It’s angular design has caught the attention of hard rockers over the years, and it lends an out of this world appeal to anyone who straps one on. Of course the USA Explorer T holds up as a sonic powerhouse as well, delivering thick sustain and electrified tone thanks to its two humbucker pickups.

L’MS has topped the list of cool electric guitars with their Acrylic guitar. Complete with LED lights that illuminate the guitar’s transparent body, the Acrylic guitar is based on the classic Stratocaster style body shape and is sure to shine when it comes to stage presence. Just when you thought the classic strat couldn’t get any cooler, someone had the bright idea to make it see through and add lights. And L’MS has packed plenty of quality in terms of sound into the instrument as well. Between its unique appearance and satisfying tone, the Acrylic Guitar is one awesome instrument.

If anything, this list should make it clear that you don’t have to sacrifice sound quality when it comes to designing cool electric guitars. Few instruments rely on their cool factor as much as the electric guitar, and luckily there are plenty of awesome designs out there that still manage to sound just as great as they look.