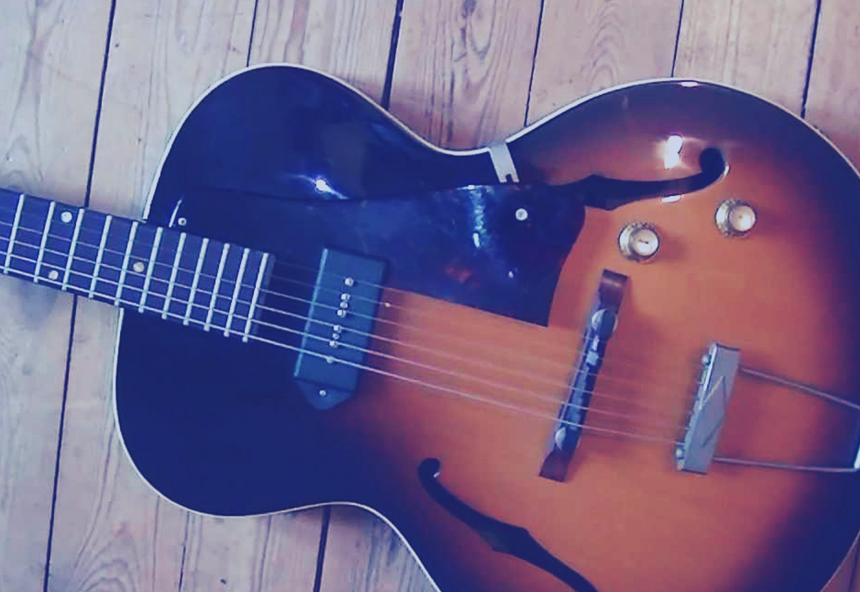 Introduced in 1941 as a replacement for the Gibson ES-100, the Gibson ES-125 featured a lavishly arched maple top which became a mainstay for these light, hollow-body electric guitars.

This is a guitar with a rich, throaty sound, and that’s what drew George Thorogood in. He recalled this in an interview with Gibson.com. The interviewer asked him what made him fall in love with the ES-125.

“It’s a very good story, and I’m glad you asked. If you have the time, I’ll try to consolidate it into 1,000 words or less,” he said, laughing. “I was playing primarily acoustic guitars, and I needed an electric, and this was a guitar that everybody wanted. It was at a shop, way up at the top of the shelf — that’s where they put the good stuff so nobody steals it.  When I got back into town after traveling a lot and needed a guitar, I went to the shop and looked up, and the guitar was still there. I sat there for years.”

So he decided he wanted to put this guitar to the test.

“I said, ‘I’d like to try that guitar,’ and they wouldn’t even let me touch it. They said that to play it, I would have to buy it. So, it was just kind of blind faith. It’s a semi-hollow body, and the strings were elevated off the body, and it had a very nice sound with the P90s, so when you put it in open tuning, there was a very, very full sound.”

And it wasn’t long before inspiration struck.

“When I played it, 1,000 ideas popped into my head. This was just the guitar for me. I’ve tried a ton of other guitars, and none of them work for me, so that’s the only guitar I want to play.”

Thorogood has plenty of room for innovation since the ES-125 is equipped with a single volume potentiometer (which controls the guitar’s volume and tone) and gold-tinted bonnet-style knobs.

And this is a guitar with a beautiful look and feel to it. The body is lightweight and carved from maple, while the neck is carved from Honduran mahogany. The package is topped off with a Brazilian rosewood fretboard.

There’s also a bit of history behind this guitar. Production was halted during World War II, beginning in 1942. The metal, as well as other materials used to make this guitar, was in short supply, so the Gibson instrument factory did its’ part for the war effort — by making airplane skids and parts for submachine guns, Gibson-prewar.com notes.

In 1956, the company began updating the es 125 with the introduction of the Gibson ES-125T. It had most of the same features, but whittled the depth of the body a little bit, from three-and-a-half inches to three-and-one quarter inches. A year later, the model was beefed up with two P-90 pickups and was called the ES-125TD.

Then came the ES-125 and ES-125TCD. The main difference between these two models is that the TC was equipped with a single P-90 pickup, as compared to the TCD model, which came with two pickups.

These are just a few of the models Gibson introduced, but the model favored by George Thorogood is the ES-125CD model. Between 1965 and 1970, only 475 ES-125C and ES-125CD were produced, making them very rare, indeed.

But for Thorogood, what makes Gibson guitars really special is this:

“The maestro,” he notes, adding that Gibson has a quality that’s all their own — a rich sound that can fill a room.

Indeed, this is a guitar with a beautiful sound that can range from a rumbling purr swelling across a room to a deep growl rolling across a floor. And when you consider that the ES-125 came from rather humble beginnings as an electric, Spanish-style guitar, this is really pretty amazing.

Sadly, by 1970, Gibson discontinued all of its ES-125 models. Rock musicians moved on to other guitar brands, as did jazz and country music guitarists, who preferred the more flamboyant Gibson ES-175.

Fortunately, through the wonders of the internet, anyone seeking these marvelous relics of rock history can still find them for sale online. That’s a comforting thought.

In the video below, George Thorogood discusses his favorite guitar.