The 5 Most Wanted Gibson Guitars for Sale … and Affordable Alternatives

There are the collectible Gibson guitars for sale that are hot … And then there are the ones you can afford. These choice picks offer good value and strong upside potential.

Of course, there are lots of great finds with amazing stories out there. Alas, the holy grail of guitar collectors — classic models in mint condition — are hard to come by. Several now highly sought after Gibson models from the 1950s and 1960s didn’t sell well when they first came out, which means that now there aren’t enough to go around. Further complicating your search for the ultimate collectible, Gibson’s quality declined in the 1970s, so models from those years aren’t as highly regarded by collectors.

The Top 5 Most Sought-After Gibson Guitars for Sale, Plus Some Less Pricey Alternatives You’ll Love

Joe Bonamassa, who’s a serious collector as well as a blues-rock guitarist, singer, and songwriter, lists the most popular Gibson models as follows. They cost a pretty penny, especially since we’ve had well-off baby boomers collecting Gibson electric guitars for the past decade to relive the heady days of their youth. But, you don’t have to be sidelined by these pricy models while browsing Gibson guitars for sale. Instead, look for under-the-radar acquisitions in good condition or that have unique stories to tell. 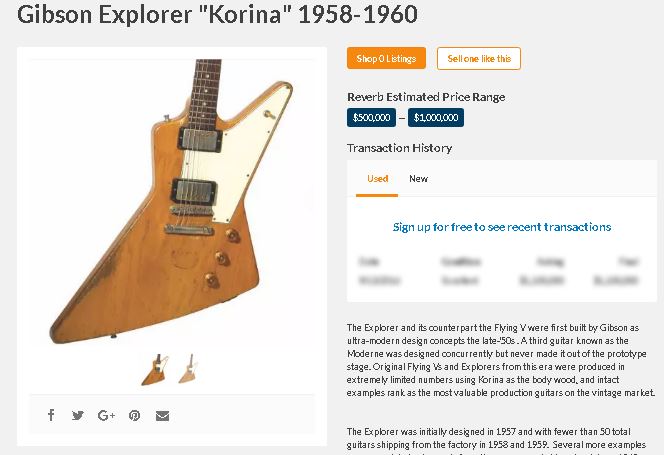 But you may be able to snag this more modestly-priced special find from the early 1980s. This Korina Explorer was based on the 1963 model and was hand-built by a high-end Luthier who’s created custom instruments for the likes of Eric Clapton, Elvis Presley, and Johnny Cash. At the time of this writing, it was listed for $17,995.95. 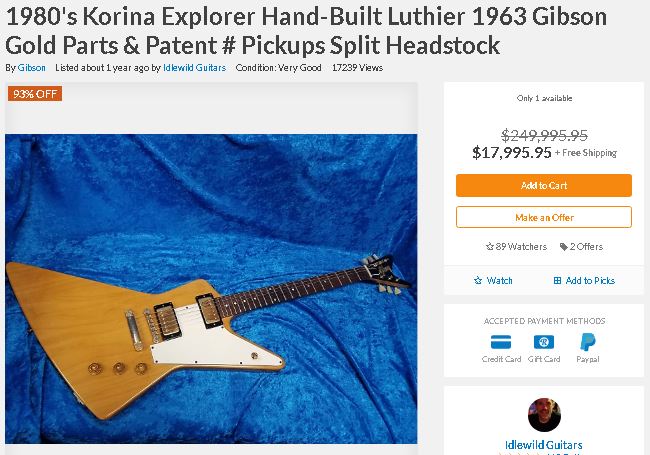 2. 1958-1960 Gibson Les Paul Standard: The distinctive maple sunburst finish and unique highlighted wood grain has made this an all-time classic. Yet, it did not become an instant one, the Gibson les Paul Standard didn’t become a hit until the late 1960s-early 1970s when guitar heroes like Eric Clapton, Keith Richards, and Jimmy Page began picking them up. By then, Gibson had discontinued the model. You can find these used Gibson guitars for sale, but they’re going for $199,000 and up these days. 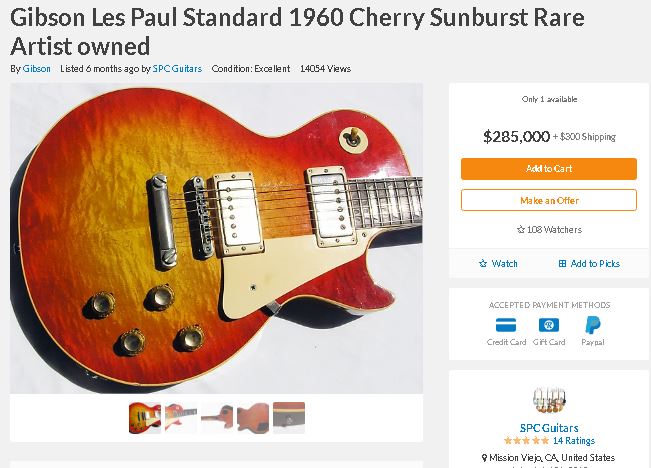 But there are other similar used Gibson guitars for sale that may catch your fancy and which stand a good chance of gaining in value. Like this mint condition Epiphone Riviera c 1967 Sunburst original vintage, This relic from Gibson’s golden era (Epiphone’s a subsidiary) was made in the original factory in Kalamazoo Michigan and listed for $3,995 on Reverb. 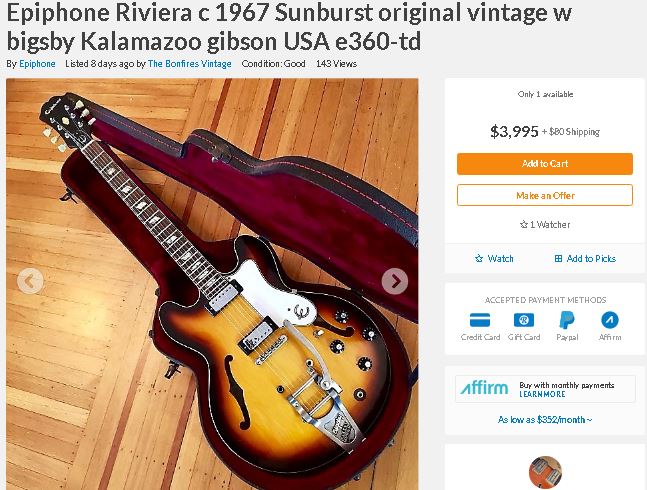 3. 1958–1959 Gibson Flying V: No one liked this futuristic-looking guitar when it first came out, so they only made 98 of them. Then Lonnie Mack and Albert King made it famous and Gibson re-launched it in 1967. So of course, collectors want the originals. The one below sold for $249,999. 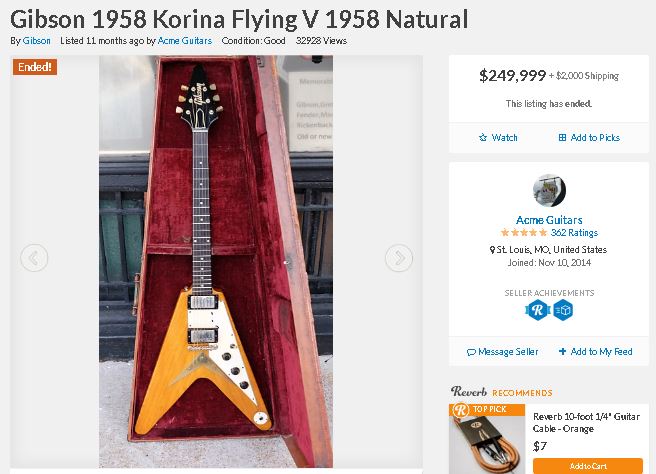 This 1979 Flying V2’s in excellent condition, is from the first year of a limited run in 1979-1982 and was made in the original Gibson Kalamazoo factory. The lister had the guitar refretted and replaced some parts. But he took care to use all originals and Gibsons new Old Stock parts. And it’s listing for just $2,599.99. 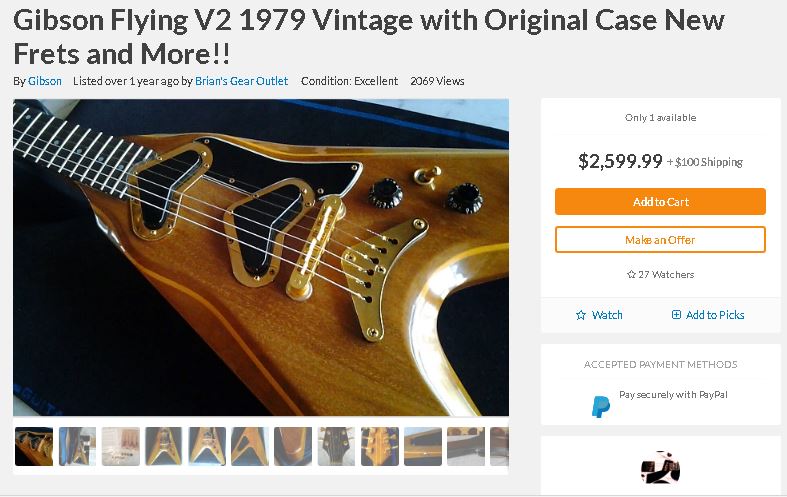 4. The 1957 Gibson Les Paul Goldtop: This was the first Gibson to come with humbuckers instead of the twangy P90 single coil pickups that defined the early days of rock and roll. Owning this piece of history requires a hefty $42,000 to $150,000. 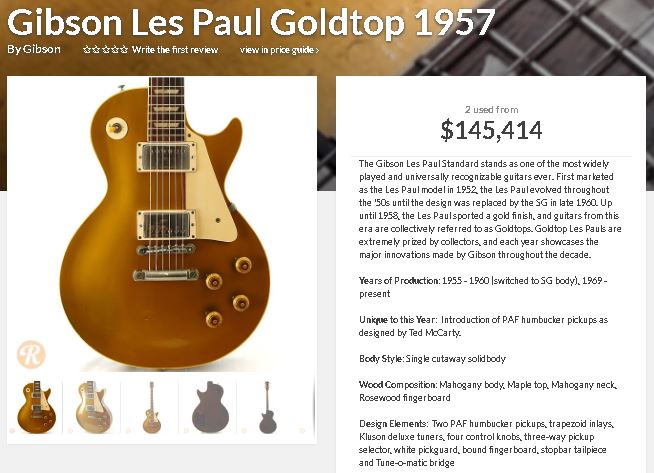 But while we’re looking at Gibson Guitars for sale, perhaps we can tempt you with this hot little number. It’s a re-issue of the 1957 Gold Top with the late Billy Gibbons’ original design. Each was hand-drawn and hand-aged, and Gibson only had 100 made in the Nashville custom shop. This beautiful axe can be yours for a far more modest $6,933.65. 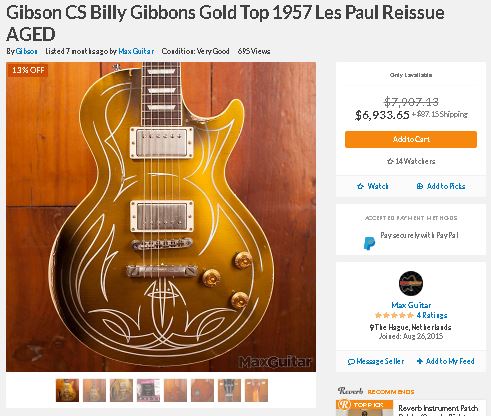 5. 1957-1961 Gibson Les Paul Custom Ebony: As noted here, in Vintage Guitar Masters, “This beauty sports a glossy black finish, gold-plated hardware, binding on its body, neck, and headstock, and features a third humbucker. Thanks to its rarity and special features, it sells for $32,000 and up. 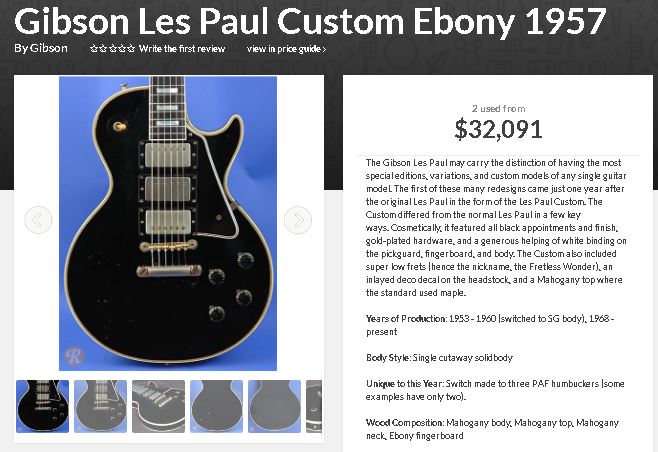 This very gently used Gibson Les Paul from Gibson’s Custom Shop is a special edition “Gold Flake and Ebony” re-issue of the original 157 version from 2003 with gold engravings. It also has a backstory, because it was made to celebrate the 10th anniversary of the Custom Shop’s move to Nashville, just two doors away from the Gibson USA facility. You can add it to your collection for $6,145.09. 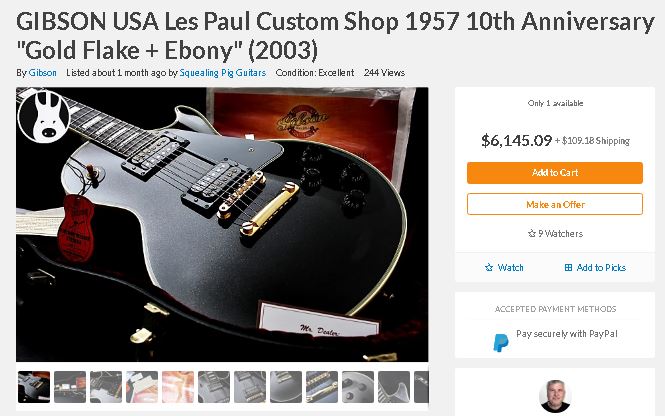 The Best Places to Find Gibson Guitars for Sale.

9 Ways to Spot a Fake Gibson in Seconds.

Guitarist Kennis Russell was hearing about how people were getting scammed while looking for Gibson guitars on sale, so he did a clever video on how to spot a fake. … From inside a pawn shop with fake Gibsons.

Here’s the video so you can see for yourself.