That versatility is what drew Leslie West, the lead guitarist for the New York-based hard rock band Mountain, to the Les Paul Jr.

Felix Pappalardi, the band’s bass player, didn’t like the guitar he was using during the band’s rehearsals. So he asked West to make his way down to the Village to a man who built pickups and amps, Guitar World reports.

“The guy’s got one of my guitars in there,” Pappalardi told West. “He’s repairing it. Tell him to give it to you.” 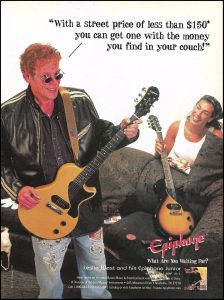 Vintage advertisement for the Epiphone’s version of the Gibson LPJ.

It was the Gibson Les Paul Junior.

“I saw it only had one pickup and some knobs, very bare.”

“It reminded me of a tree with a microphone. It stuck.”

And stick it did, leading Gibson to produce a line of Leslie West Mountain W/C electric guitars. These guitars, West adds, borrow from the Gibson Les Paul Jr.

“The pickup is a variation of the Les Paul series. The Mountain of Tone pickup is the humbucker, and so we took some of the style of the [Gibson Les Paul] Jr., and we tried to make changes to it. I played around with a bunch of different models. The most expensive ones are the maple and walnut wood ones. The lesser guitars are laminate, but they play great and sound great. I play them all.”

West appeared with Bachman Turner Overdrive when he met Les Paul and remembered feeling a bit…intimidated.

“He came to the Meadowlands, and I had his signed Les Paul Jr. at the time. I was really nervous. I don’t think he knew what he was creating when he built that guitar. I’m sure he had no idea.”

But whatever Les Paul was thinking at the time, it’s an idea that struck gold, and both Gibson and Epiphone brought out versions of this legendary guitar, beginning 57 years ago at the Gibson factory in Kalamazoo, Michigan [Note: Epiphone is a subsidiary of Gibson.] 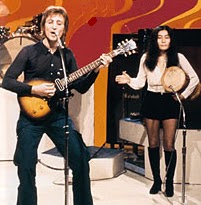 John Lennon’s best-known guitar was Epiphone’s Casino, but here he is playing an LPJ.

This beautiful guitar is prized by musicians like West, Keith Richards, Paul Westerberg (of The Replacements) and was also favored by John Lennon.

It’s easy to see why this guitar is popular. Just as it was in 1957, the Les Paul Jr. is made from solid mahogany, a quintessential tonewood that gives these guitars sonic depth and a rich tone. Then there’s the neck, which is also carved from solid mahogany to fit Gibson’s SlimTaper(™) neck. Unlike the earlier models which had tree-trunk style necks, these Jr. electric guitars promote speed and agility, but also lessen player fatigue.

But here’s the real icing on this particular cake: The neck is carefully glued into the body by using a mortise and tenon joint that deepens both resonance and sustain. And that’s topped off by a baked maple fingerboard with 22 medium-jumbo frets.accompanied by a 12-inch radius for effortless bending.

Intonation and sustain are precise in Gibson and Epiphone Les Paul Jrs. because they are equipped with Plek-cut Corian nuts. So what exactly are these nuts and how do they work? Gibson explains it like this:

“As the guitar lies in a cradle, a computer-controlled robot arm moves along the neck measuring each fret’s height, the fingerboard radius, even the bow in the neck. Using that data, the Plek machine simulates string tension, and lets you adjust the truss rod accordingly, cuts the nut slots for optimal spacing and height for each string, files each fret to a hundredth of a millimeter accuracy, and then polishes the frets.”

“In the fraction of the time it takes a skilled technician, the Plek machine eliminates buzzing strings and dead spots, producing a neck with flawless intonation and superb action.”

By now, Les Paul Jr. electric guitars were mainstays in clubs and arenas, but they were also a popular instrument for kids to learn and if there’s one thing guitar players wanted, it was easier access to the upper frets. So in 1958, Gibson introduced the Les Paul Junior Doublecut electric guitar. Featuring a double-cut body that made it easier to access those elusive frets, this updated guitar became a favorite of punk-bands and garage bands alike. And it featured all the accoutrements of the Les Paul Junior guitar, beginning with the standard P-90 pickup, the aforementioned mahogany body (which added resonance) and the also aforementioned glued-in neck. All of this adds up to a lot of depth and power in one guitar.

But it’s the P-90 pickup that makes the Les Paul Jr. stand out. This is because this single-coil pickup is wrapped with 42-AWG wire and a pair of Alnico v bar magnets that gives this guitar a sound that can purr smoothly or snarl with the best of them.

Each Les Paul Junior comes with a padded Gibson gigbag that includes an owner’s manual and a Gibson Limited Lifetime Warranty and the company’s acclaimed 24/7/365 days a year customer service.