Once Ibanez electric guitars were Les Paul knockoffs. now they’re giving Fender and Gibson, a run for the money. For those of you who’ve never heard of Ibanez, they’re a Japanese company with humble beginnings now known for well-made electric guitars with innovative designs that offer a good value for the price.

But as Reverb reports, they have a long history dates back to 1908 with a company called Hoshino Gakki. Their modest shop in Nagoya, Japan sold sheet music and other music-related products but began importing guitars in the late 1920’s. Their go-to was the high-quality classical guitars made by the then-renowned Spanish guitar maker Salvador Ibáñez. In the 1930s Hoshino Gakki began making their own guitars and took Ibáñez’s name.

That Time Ibanez and Their Les Paul Knockoffs Ticked off Gibson and Got Them Sued.

As rock and roll grew popular, Ibanez started making cheap guitars and exporting them to the U.S. These early Ibanez electric guitars were unimpressive and Reverb describes as “low-quality” and “entry-level” instruments that “looked odd” and could be found in catalogs and department stores. By the time the 1960s and 70s rolled around, Fender, Gibson, and other major American guitar makers had let their quality slip and Ibanez was happy to step in with high-quality, lower-cost knockoffs of these U.S. guitar makers’ most popular designs.

That’s when Ibanez stopped being a joke and started being a threat. Back in the days of more laissez-faire copyright and trademark laws, there wasn’t much these companies could do. But Norlin, Gibson’s parent company zeroed in the headstock designs and sued Hoshino for trademark infringement. They eventually settled out of court in 1978. 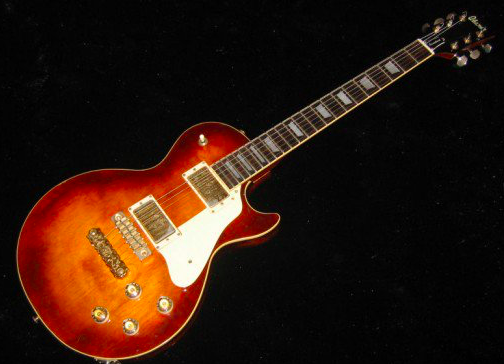 By the time Gibson and Ibanez settled, Ibanez was swiftly becoming the go-to for hard rock and heavy metal guitar soloists. In the 1980s Ibanez electric guitars began to truly shine. Their new Saber and Roadstar solid body guitars — which formed the basis Ibanez’s highly popular S and RG series — had all the features players wanted, and then some.

These included Ibanez’s trademark thin necks for flexibility, their deep cutaways so guitarists could easily access the entire fretboard, tremolos with floating double-locks to keep guitars in tune, and high-output pickups for that gritty distortion punk, grunge, and heavy metal bands prize to this very day.

Famous guitarists like the Grateful Dead’s Bob Weir from the Grateful Dead and Paul Stanley from Kiss started taking notice of these lightweight, versatile instruments. Meanwhile, Ibanez partnered with renowned artists like Steve Vai and Joe Satriani and turned them loose to innovate new designs that were like a guitar player’s wish list come to life. The resulting solid body  Ibanez electric guitars proved wildly popular.

The upstarts from Japan also made gave Gibson a run for the money with a Signature line of arch-top (hollow body) Ibanez electric guitars designed by jazz virtuosos like George Benson and Pat Metheny, along with rhythm guitarists like Bob Weir. Gibson invented the electric jazz arch-top guitar, but Ibanez took it up a notch with high quality and beautiful craftsmanship at different price points starting at entry level models for $399.00. Meanwhile, the similar Gibson ES-175s start at $1,599. Steve Vai has even launched a series of models designed especially for lefties.

I added a video to a @YouTube playlist https://t.co/HAt8QmmKt1 The Ibanez Pat Metheny Interview

Whether you’re just starting out and are on a budget or a seasoned pro, Ibanez has an electric guitar for everyone. While discontinued classics like the Ibanez RG1570 sell briskly in the used guitar market, their current models are getting rave reviews.

Ibanez RGD3127 Prestige seven-string guitar: This seven-string solid body Ibanez electric guitar lists for $2,399.99 and the website describes it as “the ultimate metal machine. Features include a Wizard-7 Neck, wide scoop cuts with tapered horns for playing on the upper end of the fretboard, DiMarzio® Fusion Edge pickups, and a Lo-Pro Edge tremolo bridge. Guitar World raves, “From the neck profile’s comfortably rounded curvature to the body’s sleek contours and silky matte finish, the RGD3127 feels very sexy in the hands.” While it’s specifically designed for heavy metal players, Guitar World assures us jazz and other players will also enjoy the versatility and range of tones.

Ibanez GRX20: This entry-level, solid body Ibanez electric guitar sells for just $149.99 and is also feeling the love. Guitar Adventures writes that although it has some minor flaws — “the pickups are good but not excellent” and “the strap nuts were a bit loose for me” — it’s well made, well-priced, and a great entry-level option.  Although the quality of the basswood for the body’s lower, this model still has the dual humbuckers He cautions that if you don’t want a “grunge sound,” you might want a  Squier Telecaster or the Epiphone Les Paul. But he concludes, “Overall, however, I think that the Ibanez produces a tone that matches that of the Stratocaster but at a lesser price.”

Ibanez RGA Iron Label (RGAIX6FM) series: Described as “metal to the core,” Ibanez vows these models are “purposefully Spartan” and that “you won’t find a feature here that doesn’t contribute directly to rattling bones or waking the dead.” Ibanez first launched the RGA series in 2005, then took them off the market and revamped them. Wired Guitarist says they wanted to hate the new ones because they miss the old ones so much. But after taking a RGAIX6FM for a spin they wound up raving about the punchy tone,  Gibraltar II bridge, locking tuners, the All Access Neck Joint (AAN), and the Nitro Wizard neck with harder wood for a longer sustain. Nor could they resist the prices, which range from $199.00-$1,299 (like the RGAIX6FM).

Darrel Braun, a guitarist with over 160,000 YouTube subscribers compares guitar tones between an Ibanez RG and a Gibson Les Paul. (Les Paul by Gibson vs. the Ibanez RG). Gibson and Ibanez’s electric guitars are very different, yet both dominate the heavy metal, prog rock, and hard rock niches. The video has hundreds of comments and over 187,000 views.