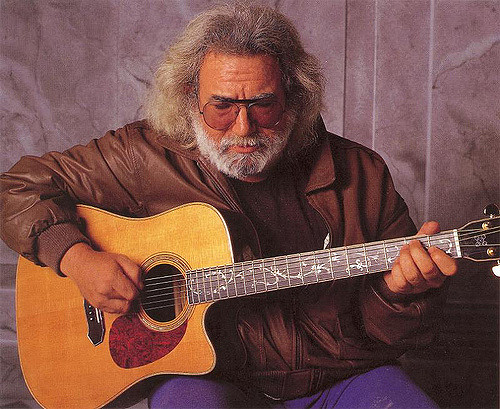 Jerry Garcia is one of the most well-known guitarists of all time. He has appeared on stage with a number of bands but his role as a part of Grateful Dead is what cemented him as a household name in rock music.

Legendary guitarists like Jerry Garcia can drive demand for guitars by simply picking up a certain brand or model. When people saw what Jerry Garcia was playing on stage they wanted to own the same thing.

Throughout his career, Jerry Garcia played over 25 different guitars but there are a few that stand out in the mind of his fans.

The Guitar That Started It All

In the mid-1960’s Jerry Garcia gained popularity as the guitarist for The Warlocks. The guitar he played at their shows was a Guild Starfire.

As his reputation grew, more and more brands wanted to be associated with Garcia’s unique playing style that was quickly taking the music world by storm.

After Grateful Dead was formed and began touring, Garcia’s eye turned to Gibson. For years he played a rotating cast of Gibson guitars and helped to make some of their models the most iconic guitar models ever produced.

The Gibson Les Paul was a favorite of Jerry Garcia. He had his own customizations made to ensure the guitar suited him perfectly but no amount of customization would ever hide that iconic Les Paul body shape.

In the late-1960’s Jerry Garcia was seen playing a Gibson SG rather frequently. To this day, the Gibson Les Paul and Gibson SG are two of the most popular guitars among enthusiasts.

The Gift of Great Music

Sometimes the best guitar you can ever play is one you are given as a gift. Evidently, this is also true for one of the most iconic guitarists of all time.

In the early 70’s Graham Nash gave Jerry Garcia a Fender Stratocaster. This guitar became one of the most recognizable Jerry Garcia guitars thanks to its unique customizations and alligator sticker on the pickguard.

For a good portion of the early-1970’s Jerry Garcia was known to play two different Fender Stratocasters quite regularly at his shows. Much like the Gibson Les Paul and SG, the Stratocaster is one of the most well-known guitar models ever built and you will likely see one on display if you were to walk into any guitar shop.

While the Stratocaster wasn’t made popular by Jerry Garcia, seeing him on stage with the Fender guitar certainly helped the brand build on the reputation that it still enjoys many years later.

While the Fender Stratocaster and Gibson Les Paul guitars are iconic in their own right, there are some custom guitars made for Jerry Garcia that are synonymous with his name.

A custom guitar, known as “Tiger”, is arguably the most iconic guitar Jerry Garcia ever played. This guitar was built for him by Doug Irwin who was reportedly told that cost was no obstacle when building this perfect guitar.

It took 6 years to build Tiger and Jerry Garcia played the guitar for over a decade. There are a number of interviews where Garcia fawns over the masterpiece built for him and the unique sounds it was able to create.

As time went on and technology changed, Jerry Garcia commissioned another guitar from Doug Irwin known as “Rosebud.” Appearance-wise, Rosebud was very similar to Tiger which only helped build the iconic image that Garcia had been working with for a decade previously.

Rosebud was slightly lighter than Tiger and featured MIDI controls built right into the body. Coming in at $11,000, this was Jerry Garcia’s most expensive guitar that he commissioned.

Just Scratching the Surface of History

Jerry Garcia played a number of guitars throughout his career and each one holds a place in music history. Fans certainly have their own favorites with Garcia, having been a part of so many different iconic bands and their songs.

A lot of people have taken up guitar because of Jerry Garcia and even more have likely based their purchase decisions on what brands or models he has played. While you won’t be able to play Tiger or Rosebud in your own home, there are a number of incredible guitars that received the Jerry Garcia seal off approval during his career.

Nothing is more exciting than listening to some of Garcia’s most famous riffs knowing you own the same model he used to create that work of art.