The Rich History of Kiesel Guitars 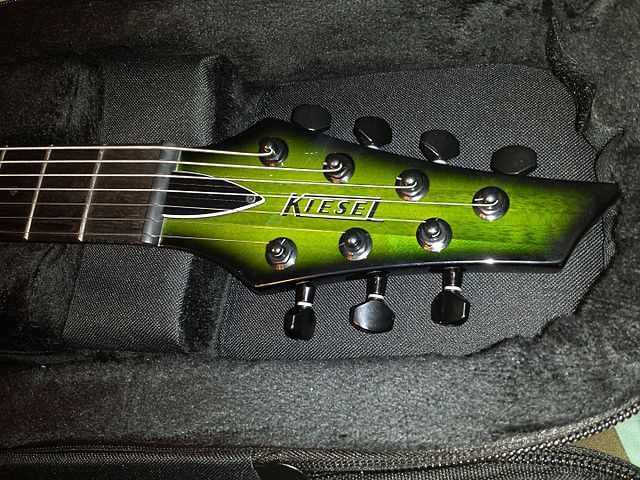 Every guitar manufacturer has a story and Kiesel Guitars is no different. These bold electric guitars and bass guitars are instantly recognizable by enthusiasts and owning a Kiesel guitar is like owning a little piece of music history.

The company currently produces custom order guitars for their clients which means you aren’t likely to find a Kiesel guitar on the shelf at your nearest music store. Online auction prices can vary with most Kiesel Guitars coming in at more than $1,000.

What exactly makes these guitars special? Why should enthusiasts want to add a Kiesel Guitar to their collection?

The Early Days of Kiesel Guitars

That headline you just read isn’t exactly accurate. That’s because Kiesel Guitars was not always Kiesel Guitars. This is part of what makes some of their products so desirable.

The company began in 1946 and was known as the L.C. Kiesel Company. That name quickly changed to Carvin before the end of the decade. It’s the Carvin name that became synonymous with quality.

In the 1970’s and 1980’s Carvin was a very popular guitar manufacturer with some big names choosing to play their guitars on stage. Enthusiasts would order the boldly styled guitars from Carvin to try and capture some of the magic they saw with their favorite musicians.

It was in the 1970’s when Carvin became a mail order, custom guitar manufacturer. They aimed to serve a niche market. Carvin guitars were seen as a sort of luxury for guitar players. People felt these guitars had a certain level of quality when compared with mass produced guitars you could pick up off the shelf and this reputation lasts to this very day.

From Carvin Guitars to Kiesel Guitars

After making guitars, bass guitars, amplifiers, and other audio gear under the Carvin name since 1949, the company was split up in 2015.

Carvin is still around today but the company mainly focuses on audio equipment. Kiesel Guitars was formed as a new company to honor their late founder, Lowel C Kiesel. The Kiesel Guitars brand took over manufacturing of the guitars that once bore the Carvin name.

This name change is part of what has made some of these guitars so highly sought after. The Carvin name was once associated with top quality guitars and that name is no longer being put onto new guitars. This means that the older models are a sort of collectible.

This can increase the price of some older Carvin guitars quite significantly. Keep in mind that these guitars were often collector’s items to begin with as they were custom built rather than mass produced for retail stores.

There is a small but incredibly passionate group of guitar enthusiasts that choose Kiesel guitars over other guitars available. Much of the reason for this is the allure of being able to custom build your own guitar and select the parts that will work perfectly with your own playing style.

Professionals also help drive the popularity of the Kiesel Guitars brand. Jason Becker, for example, is an incredibly popular heavy metal guitarist who advocates for Kiesel Guitars. In fact, he has his own signature guitar available from Kiesel Guitars.

Kiesel also offers a number of acoustic guitars to appeal to all types of players. In addition to these guitars, you will also find 7 and 12 string guitars from Kiesel Guitars. There is a very good selection of styles to choose from when looking to build your own Kiesel guitar.

One of their most interesting products is the headless guitars offered by Kiesel. These guitars have a unique appearance and look like the guitar is incomplete. In reality, the headless design is a popular choice for many who want a unique look and the sound is just as good as a guitar with a head.

Since Carvin Guitars are no longer being made, people will search auctions for these collectible items. They make for great guitars and great conversation pieces.

The current era of Kiesel Guitars is just as highly sought after if only slightly less rare since you can still go out and order one of these beautiful guitars. Behind the Kiesel Guitars name is decades of Carvin Guitars history. Old or new, you can’t go wrong with a Kiesel or Carvin guitar.