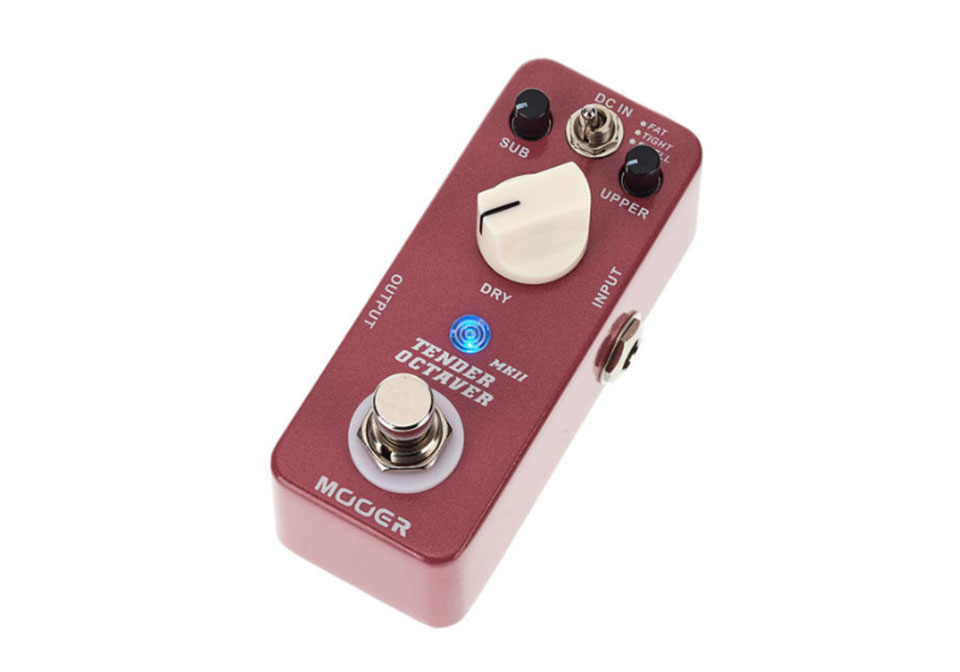 Mooer, the maker of micro-sized guitar effects pedals, brought back the Mooer Tender Octaver in a micro version (MK II) and added a pro version. If you’re one of the many musicians who used and loved the Mooer octaver when it first came out, you’re likely excited about this reissue.

If, however, you missed out the first time, you’re in luck! And you also probably have a lot of questions about this little pedal, including whether or not it lives up to its claims, how it improves on the original, and how the micro is different from the pro. Well, we’ve got answers. Keep reading for an in-depth review of the Mooer Tender Octaver plus detailed information on using octavers.

What is an Octaver, Anyway?

An octaver is a type of pedal. What’s a pedal? Simply put, a pedal gives flavor to your sound. It typically goes in between the guitar and amp (though not always); you can use several different pedals to layer sounds and achieve unique tones. Most gig players use extensive pedalboards to house all their pedals, which can range from extremely basic to very complex.

Speaking of lots of pedals, it’s true--there are a lot of pedals out there. Pedals range from gains boosters to wah-wah effects to amp emulation and everything in between. The Mooer Tender Octaver is a type of pedal known as a frequency effect (FX) pedal. Here are a few other common pedals:

Other common pedals are loopers and instrument modeling.

How Do Pitch Shifters Work?

Pitch shifters are a kind of FX pedal. They either raise or lower the pitch of the guitar signal (some do both) and then harmonize the shifted pitch with the original pitch. Some pitch shifters even allow you to “dial in” chords.

Here’s one famous example of how an octaver can be used to great effect: when the White Stripes released their iconic classic “Seven Nation Army,” they didn’t have a bass player. Instead, the famous bass-like riff was created with a DigiTech Whammy pedal.

When Should You Use an FX Pedal?

Pitch shifters can create interesting sounds, but beware--the more you alter pitch, the less dynamic and realistic your sound. That’s not to say you shouldn’t use an FX pedal (we think you should), but it is to say that how you use an FX pedal should be carefully considered.

You can use an FX pedal to get the following:

While everyone has an opinion on pedals, there’s no right or wrong, and the bottom line is that you should try a pedal before making a final decision.

There are two types of octave pedals: analog and digital. Analog pedals are the simplest, electronically speaking, and the oldest. They are limited by the fact that they can only track with a single note and can usually only go up or down by a single octave. If you start to play a chord, most musicians find an analog pedal will fail.

This isn’t always a problem; sometimes these simpler pedals are preferred by musicians, especially for their unique sounds. Digital pedals, however, while more complex, can track with chords and have a wider octave range (some even include drive modes that are built in). Some musicians argue, however, that this kind of extra complexity is unnecessary.

What many people do agree on when it comes to octavers, however, is that fuzz is awesome, and an octave pedal can help you get it. Jimi Hendrix is the obvious master of fuzz (he used an octaver plus distorter to get the sound), but you can also hear early fuzz on the Kinks’ “Girl You Really Got Me.”

We’ll repeat this again and again in this article, but at the end of the day, finding your unique sound is what’s important. The good news is that an FX pedal can help you get there!

In May of 2018, Mooer announced that it was bringing back its Tender Octaver micro pedal due to “huge demand and a mass of inquiries from musicians across the globe.” The company explained that it was keeping the simple controls and tiny size of the original pedal, with some unique updates.

In a separate press release on the same day, Mooer also announced that it was releasing the Tender Octaver Pro for those who wanted to expand on the original micro pedal’s features. Both pedals have been warmly received by the music community at large; keep reading to learn what you can expect from each. 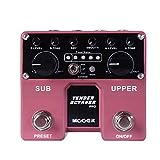 Mooer explains that the reason behind the Pro version of the Mooer Tender Octaver is lots of requests from musicians who liked the original but want additional features. For these artists, Mooer has added the following effects to its original harmonization and pitch shifting effects:

What Do We Think About the Micro and the Pro?

Our first thoughts are on the Pro--it’s too much. The beauty of the micro was its simplicity, and we feel the Pro simply clutters things up too much.

When it comes to the Micro, however, we think Mooer is on to something. It is about as simple and basic an octaver as you can make, but we think that makes it perfect. It’s not large or bulky or full of switches, so if you want to focus on playing, it’s ideal. It’s also ideal if your pedalboard is already cluttered, and it’s a small, inexpensive pedal that gets the job done admirably.

The Magic of Simplicity 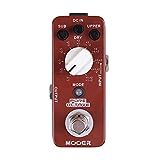 As we’ve already mentioned, the octaver has ultra-simple controls. This means it’s a breeze to explore and learn to use, but you also have some flexibility in how you combine effects. You can blend the upper and lower octaves as well as the dry, plus there’s a stomp switch.

Power isn’t a problem for this little pedal. It comes with a true bypass and runs on a power adapter or a 9V battery--nothing fancy or out of the ordinary here.

Sound is where the octaver shines. Thanks to its simplicity, it’s able to deliver what it promises: an organic, legendary tone that doesn’t fall prey to artificial sounds. You can even use it for professional-level gigs if you’d like to.

How Does the Mooer Tender Octaver Compare to the Competition?

To get a better idea of whether or not the Mooer Tender Octaver is right for you, we thought we’d compare it to three of the top octavers currently on the market.

What Do We Think?

Frankly, pedals are subjective, and there’s no way we can tell you what to get or what not to get. You have to explore and try things out for yourself. Is the Mooer Tender Octaver worth explorer? We believe it is.

The Mooer strikes a beautiful balance between great sound and simplicity, enabling you to focus on playing without sacrificing great effects. It’s also extremely practical, durable, and will continue to wear well even as it grows older. Plus, it’s relatively inexpensive and can hold its own even when compared to more complex, more expensive pedals.

The Mooer Tender Octaver deserves a place on your pedal board if only to try out. You’ll be impressed by its abilities even as you remain distracted thanks to its simplicity.