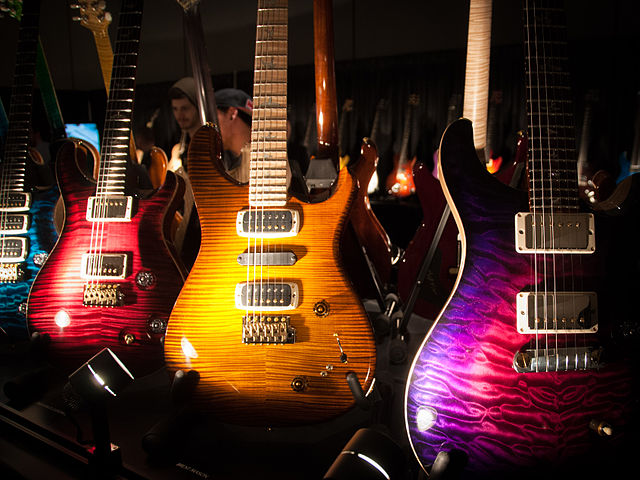 Are you a fan of PRS guitars? Are your Fender, Gibson, and Ibanez friends bragging about the famous rock stars slinging their axes? If you’re tired of that noise, check out this list for some ammunition you can use the next time the topic comes up.

And a few custom guitars, too – they are rich and famous, after all.

1. Carlos Santana Has a Whole Collection of PRS Guitars

The man who needs no introduction, Carlos Santana has been using PRS Guitars since 1982. PRS even makes a full line of Santana-branded models to celebrate the man’s over 50-year career.

Carlos Santana tends to stick to the Santana collection – can you blame him? He switches between his Santana SE One Abraxas, his Santa I and II, and the Santana MD Signature Model. They all have Rosewood (and Brazilian Rosewood) fretboards and mahogany necks and bodies.

When he’s not popping up on reality shows like Z Rock and Rock and Roll Fantasy Camp, he’ playing his signature model PRS.

The guitar is white and has gold hardware accents, and he’s been using it since Lollapalooza in 1991.

Dave Navarro is the kind of guy who likes variety and has been known to play Gibsons and Fenders every now and again. However, the white PRS is his primary, the one you’ll see the most often on stage.

The Grammy-winning pop, rock, and blues singer John Mayer is a guitar man – and not just playing them. Collecting them, even designing them alongside famous and well-respected craftsman.

His own personal collection contains a number of Fender Stratocasters, modeled off the likes of legends Stevie Ray Vaughn and Jimi Hendrix. He has a red Gibson ES-335 and quite a few Martin acoustics.

However, in 2014 John Mayer broke from Fender, which lead to the cancellation of his signature John Mayer Fender. Instead, Mayer jumped ship to Paul Reed Smith guitars. Since then, he’s actually worked closely with Paul Reed Smith himself to design a new model.

In 2017, John Mayer started using a white and silver vintage-styled PRS guitar – and with it was turning heads in the guitar world. Not long after, they announced the model was called “Silver Sky,” and would ship in March of 2018.

Already a PRS man, he’s been seen on Ellen and in other performances rocking the PRS Silver Sky guitar.

The famous lead guitarist for both Creed and Alter Bridge, Mark Tremonti is also a prolific songwriter and singer. He’s won Guitar World’s “Guitarist of the Year” on 3 separate occasions, and he’s also a huge fan of PRS guitars.

He started on the McCarty model, but decided to work with PRS to create his own signature model. From there sprung the Mark Tremonti Signature model. Made of carved maple and mahogany with a pattern thin neck shape, it also has silver bird detailing all along the fretboard.

Mark Tremonti even helped PRS come up with a new amp to fit his style – the MT-15 two-channel amplifier.

How do you feel about ’80s hard rock bands? Big hair, tight pants? If you’ve ever heard the chorus of “Here I Go Again” and dropped a foot on your gas pedal, then you know Whitesnake.

Bernie Marsden began as Gibson fan, and his infamous Les Paul, “The Beast” is well known to rock fans. However, he recently started playing Paul Reed Smith guitars, and even has his own signature line with them: the PRS Singlecut and the new BM redux that was just released to replace it.

It’s much thicker and heavier than a lot of PRS guitars, but is that really surprising come from a hard rock thrasher like Marsden?

Though PRS is a much newer company than many of the legendary guitar manufacturers – it was only formally founded in 1985 – it’s still managed to collect quite the stable of talented guitarists, singers, and songwriters.

Obviously, you don’t choose your guitar based off what the cool kids are doing. BUT, if you’re already slinging a Paul Reed Smith guitar and want a couple bona-fides to toss at your more vocal Les Paul and Strat friends, we’re happy to help you out.