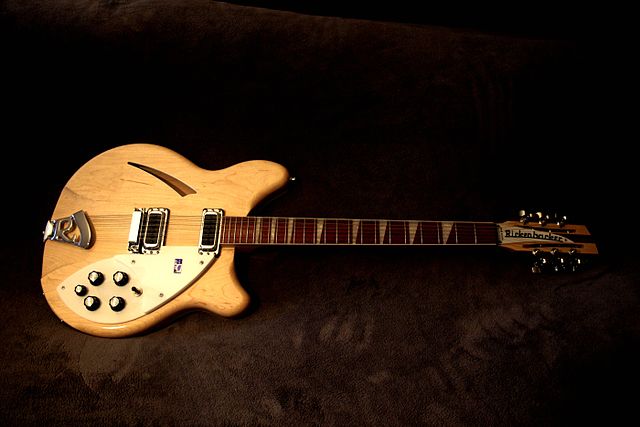 Rickenbacker guitars have been around for a long time and have been in the hands of some of the most famous players in the world.

Did you know all of these surprising facts about Rickenbacker guitars? Take a peek for yourself and test your rock knowledge.

1. The Rickenbacker 4001 is the Favorite Guitar of Dozens of Rock Stars

Between 1960 and 1980, the Rickenbacker 4001 reigned supreme amongst bass players. With a simple two pickup design, the 4001 had a more resonant tone and a cleaner sound than previous models.

Cliff Burton of Metallica used a 4001, as did John Entwistle of The Who, Geddy Lee from Rush, Bob Hardy of Franz Ferdinand, Glenn Hughes of Deep Purple, Lemmy from Motorhead, Chris Squire from Yes, Roger Waters of Pink Floyd, Maurice Gibb of the Bee Gees, and perhaps most famously, Paul McCartney of Beatles and Wings. Plus, dozens of more bass legends.

That’s quite a pedigree!

2. It was Named After War Hero Eddie Rickenbacker

Well, kind of – he was about half responsible for the name. Eddie Rickenbacker was a famous fighter pilot in WWI: moreover, he was the most successful fighter ace during the war, with 26 aerial victories under his belt.

The man was a legend, and not just because of his flying chops. He also spent his civilian days designing and selling his own cars, managing Eastern Air Lines, and even owning the Indianapolis Motor Speedway.

He also wrote “Ace Drummond,” a popular comic strip that ran for about five years and later became both a radio program and a film.

3. Rickenbacker is Over 85 Years Old

The name went through a few changes in the early days.

The first official name was the “Ro-Pat-In Corporation,” a shortening of Electro-Patent-Instruments. While the name was very descriptive, it wasn’t exactly sexy. Eventually, they named the company “Rickenbacher,” to draw attention to their most popular product, the Rickenbacher A-22.

This was then Americanized into the “Rickenbacker” that we know today.

That’s right! Leo Fender, the founder of Fender Instrument Manufacturing Company, had a hand in the early days of Rickenbacker, in a round-about way.

Leo Fender owned and operated a repair shop in the 1940’s, and did a lot of business repairing Rickenbacker amps long before he started his own guitar company.

In another Fender-Rickenbacker connection, Leo Fender met Doc Kauffman (an inventor who had once worked for Rickenbacker) during WWII. Later, the two teamed up with their own company – K& F Manufacturing – and designed amplifiers, guitars, and steel guitars with electric pickups.

The A-22 Rickenbacher electric lap steel guitar, based off the “Frying Pan” prototype created in 1932, went into heavy production the following year. Though it didn’t crush the market with sales, it did expand steadily despite the Depression-era economy.

In fact, they were such high-quality make that the original A-22s and A-25s are still sought after by players and collectors alike.

The History of Rock and Roll

It’s not that hard to argue that the history of early Rock ‘N Roll was written on Rickenbacker guitars. They were right there in the beginning, at the birth of both the electric guitar and the sound that would come to define Rock forever.

Every single member of the Beatles – save Ringo, obviously – played on Rickenbacker guitars, and their jangly sound has been associated with the band ever since. Tom Petty, the Edge, and Susanna Hoffs – alongside hundreds of others – rode Rickenbackers to stardom.