What do Gibson and jazz guitar great Tal Farlow have in common? A long history of collaboration as Farlow played, revamped, and on several occasions even designed special edition guitars for them.

Tal Farlow was born in 1921 in Greensboro, NC and taught himself to play guitar at age 22. His first real guitar was a Gibson, but he started out on a mandolin that he tuned like a ukulele. Before going on to be among the first beboppers, he worked as a sign painter — his musically-inclined father encouraged him to avoid hard labor in the area’s mills and factory — and took the night shift so he could listen to big band music on the shop’s radio. Called “Octopus” because of his large, fast hands and splaying fingers, he pioneered new jazz guitar techniques like artificial harmonics and tapping the guitar to add percussion.

The New York Times adds the innovative guitarist was strongly influenced by the pianist Bud Powell, who in turn was inspired by Art Tatum. The writer praises the “clean and undistorted” lines of Tal Farlow’s improvisations, along with  “his sense of narrative” and  “the way his ideas swooped and resolved, always sticking close to the geography of a tune’s structure.” Like other musicians of the time, he quoted other songs but added vibrancy and originality.

Tal Farlow started gaining notice in 1949 while playing in a trio with the legendary vibraphonist Red Norvo and double bassist, pianist, composer, and band leader Charles Mingus. Then, in 1953, he did a stint with big band favorite Artie Shaw in the Gramercy Five and moved on to launch his own trio in New York City with Vinnie Burke and Eddie Costa. At this point, he’d begun making records under his own name and won a Downbeat Award in 1954. These well-received albums included “Tal,” “This Is Tal Farlow,” “Autumn in New York,” and “The Tal Farlow Album.” If you look at the photos on his albums (Here’s his discography), you’ll see he always played a Gibson jazz guitar.

Here’s a video with Tal Farlow in a live performance.

Tal Farlow & Red Norvo – All of Me: https://t.co/QDaWRkIKeQ

You’d think he was on his way to major hits, fame, and fortune. Instead, he married Michele Hyk 1958, settled down with her on the Jersey Shore, and resumed his career as a sign painter. He still occasionally played in clubs, and even recorded an album, “The Guitar Artistry of Tal Farlow,” with Verve Records. But after that, his musical activity was sporadic until the late 1970s.

In 1981, filmmaker Lorenzo DiStefano released a video that was part jazz guitar instruction and part documentary. “The Legendary Guitar of Tal Farlow” was never a hit, but it was well received in the jazz guitar community. Jazz Guitar wrote, “This is one of those tapes that you should just watch and learn. Tal is not with us anymore, and this is the best visual document of his playing we have.”

Other than the above documentary, Tal Farlow seemed to avoid the public eye as much in death as he did in life. Then his widow, Michele Hyk-Farlow realized the house they’d shared together was full of his guitars that only got played once in a blue moon when his guitarist friends came by. Since auction houses won’t sell guitars anymore, she got hold of Rudy Pensa, the collector, made-to-order guitar builder, and the owner of Rudy’s Music in SoHo, Manhattan.

The result, as covered by Guitar Aficionado, was a special exhibition and sale of Tal Farlow’s customized Gibson jazz guitars in April of 2017. Each of these unique guitars tells a story.

Tal Farlow’s first Gibson was a 1939 ES-250 he bought in 1945 as he launched his musical career. As time went on, Tal Farlow had many customizations made by Los Angeles’ master luthier, Milt Owen. In a 1981 interview, he enthusiastically told Crescendo magazine:

“I had [Owen] take the fingerboard off, put a new one on, and eliminate the first fret—move the whole thing up toward the nut, including the bridge. By eliminating that first fret, it makes the scale shorter by an inch and a quarter. Well, when you do that up there at the [original] 12th fret, you gain two frets—because they’re half the size up there. It’s [originally] 14 frets clear of the body; doing that makes it go up to 16. And that guitar wasn’t a cutaway…so it enabled me to reach higher notes without buying a new guitar!” 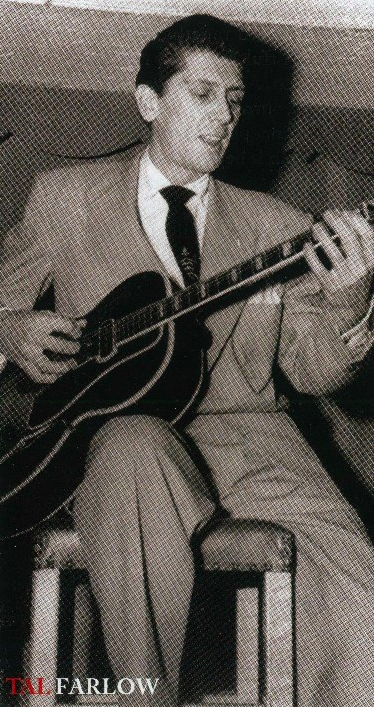 Tal Farlow playing his ES-250 (Photo via the liner notes of a Red Norvo album via Jazz Guitar magazine.

Soon Tal Farlow’s recordings with Red Norvo and Charles Mingus caught Gibson’s attention. In 1950, Gibson sent Tal Farlow a brand-new ES-350 jazz guitar, which he promptly began modifying. Meanwhile, his dear old dad tried to restore the 1939 ES-250 to its original state, which made it unplayable (the customizations were later restored by a master luthier for the exhibit). 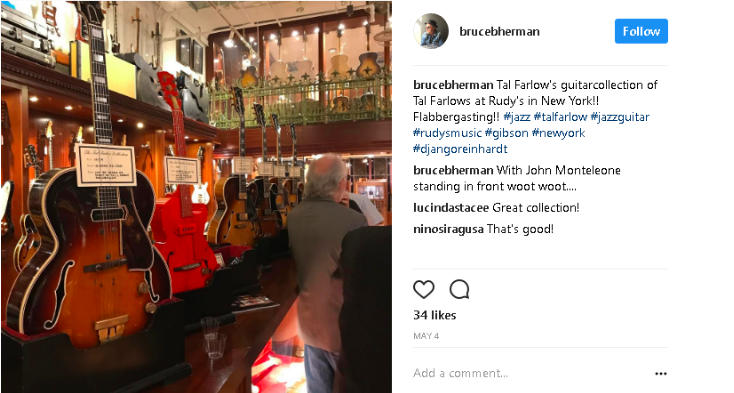 One of the oddest items in this collection is a small, bright-red Gibson ES-40 from 1951 that Tal Farlow named Little Red. Because he and Mel Torme appeared on CBS TV’s first color broadcast and the producer wanted bright colors, Tal Farlow asked Gibson to paint it red.

In 1960 Tal Farlow prototyped a design for another Gibson jazz guitar and named it “The Blonde.” 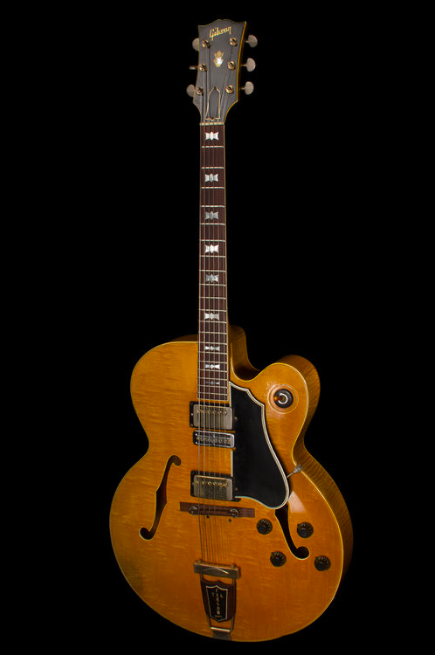 Tal Farlow was unhappy with the last prototype, but this time he got it right. The Gibson Tal Farlow one of the many styles of archtop jazz boxes made and sold by Gibson over many years. Only 215 of these original Gibson Tal Farlows were produced between 1962 and 1969, making them true collector’s items. They were distinguished by a Florentine cutaway with unusual binding inlays. This was a back when jazz guitarists had a lot of influence and guitar makers like Gibson could afford to produce boutique niche items like this. 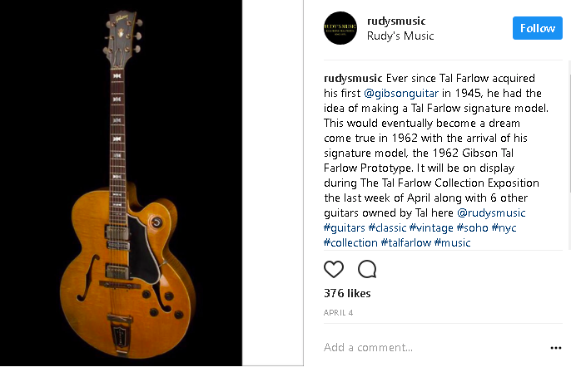 Here’s a photo from a master luthier at Pensa Custom Guitars who had the honor of restoring one of Tal Farlow’s guitars. 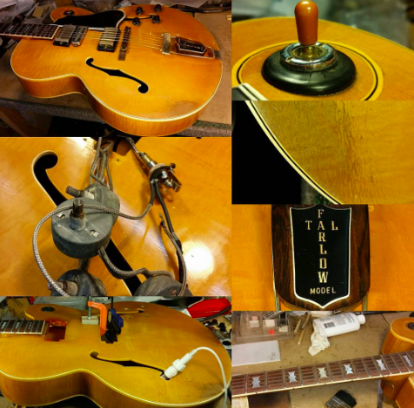 Tal Farlow prototype in the process of being restored. Photo via Instagram.

At some point in the 1970s Tal Farlow also fashioned a curious wooden stool with a custom volume pedal. 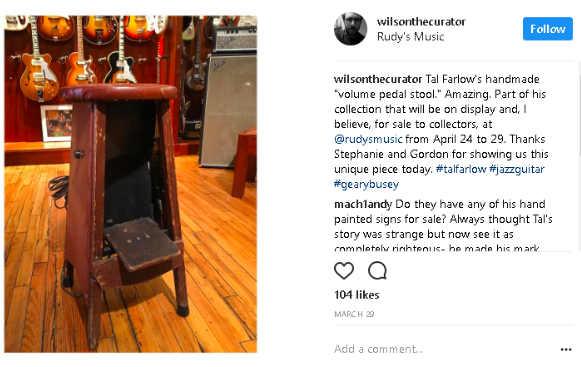 A third Tal Farlow prototype and main axe for his live concerts, a Tobacco Starburst stolen from Newark Airport in 1978. However, his 1996 Viceroy is alive and well. 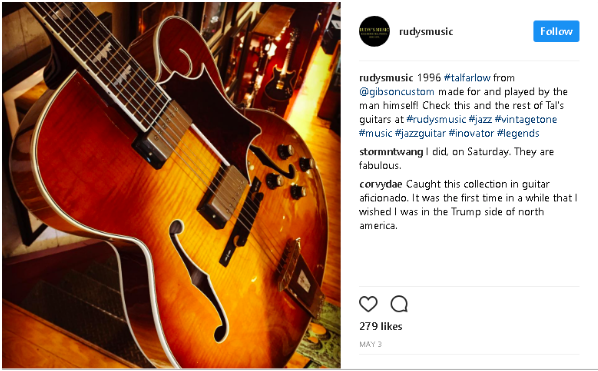 Tal Farlow’s Viceroy from 1996, one of his last Gibson jazz guitars. Photo: Via Instagram.

Jim Bastian from Premier Guitar notes Tal Farlow was one of only three jazz guitarists honored by Gibson with their own signature models. The other two were Johnny Smith and Barney Kessel. He adds, “Tal gave guitar lessons at his home until his death in 1998 at age 77. He left behind a fine legacy of recordings – and an excellent Gibson artist model.”