Telecaster vs Stratocaster: Which Is Better for Rock, Beginners, and Versatility?

Born only three years apart in the early 1950s, the Fender Telecaster and Stratocaster are paragon six-string brothers in arms. Their indelible sonic signatures have shaped creative legacies crossing genres from classic jazz to latter-day jam bands with undeniably influential impressions upon just about every style in between. In the annals of legendary guitars, only the esteemed Gibson Les Paul has arguably meant more to one generation after another of definitive music. That begs the question: Telecaster vs Stratocaster – who’s the king?

The Great Telecaster vs Stratocaster Debate

To be absolutely clear, there is absolutely nothing patently “wrong” with either the Telecaster or Stratocaster’s shape.

To any guitar aficionado worth a lick (pun intended), there are no two more famous shapes in the world than these two beauties. The closed pores and feathery weight of both bodies’ lightweight alder wood imbue their respectively balanced, resonant tones with superb sustain and attack as sharp as a stiletto. Depending on the singular Telecaster or Stratocaster you held in your hands, an educated player might also appreciate the various uses of mahogany, ash and other tonewoods through the years.

With a lone cutaway and an absence of body contours, the Telecaster silhouette might look almost like little more than a rough or draft, early-design Stratocaster to someone who never saw a guitar before sees this latter model first. Truth be told, the Stratocaster’s distinctive sleek figure is more than a distinguishing mark aesthetic choice. The finely shaped contours make it instantly comfortable to play. Also, the added upper-horn cut-out allows easier access to upper-register notes.

Both originally got their biting voices from bodies of snappy alder tonewood. They are also available in ash bodies. People often praise these models for the subtly better resonance and depth in their tones. Some of the very earliest Telecaster bodies were pine. But best of luck finding one today.

Finally, both the Telecaster and Stratocaster feature identical bolt-on necks with 22 frets spanning a 25.5-inch scale with the exact same nut width and 9.5-inch fretboard radius. Setting the two models apart, the Stratocaster’s considerably bigger headstock has spurred years of debate among guitarists. They cannot seem to agree whether or not it increases the guitar’s tone and sustain to any meaningful degree. 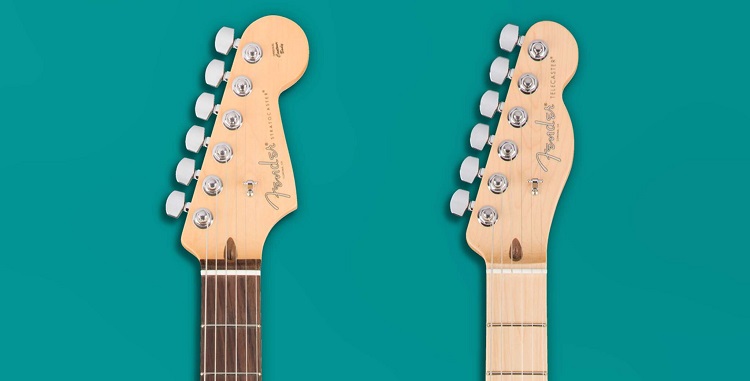 To truly set a Telecaster and Stratocaster apart, look to each guitar’s bridge. The connective springs attaching a Stratocaster bridge’s two-piece tremolo system to the guitar’s body make it somewhat trickier to keep in tune, compared with a Telecaster’s one-piece bridge extending underneath its pickup. However, the ability to tweak string tension to taste benefits vibrato to such a dynamic extent as to make the added effort plenty worthwhile. Curiously enough, it isn’t at all unusual for Stratocaster players to “block” the bridge in order to improvise something akin to a Telecaster’s fixed design.

In terms of electronics, the Telecaster and Stratocaster are the alligators among iconic guitars. They’ve barely evolved at all from their pioneering blueprints. The Telecaster offers a single tone control and three-way switching. This is a no-nonsense package that brings out the best in any truly creative player’s crafty musicianship and diligently sharpened technique. While the Telecaster forces guitarists to conjure better sound by challenging them to tirelessly explore innovative ways to adapt simple tools, the original Stratocaster placed revolutionary new implements in musicians’ hands and set their imaginations free to explore the versatility of their new toys.

Fender’s follow-up to the Telecaster added two separate tone knobs dedicated respectively to the middle and bridge pickups. On top of that, fascinating “quack” tones emerged from the expansion to five-way switching when players explored the intermediate “2” and “4” settings. If it wasn’t a whole new language, the electric guitar was suddenly speaking with never-before-imagined vibrant dialects.

For an axe with so few fancy bells and whistles, the Telecaster’s voice is astoundingly multifaceted. Leo Fender designed the original with a squeeky-clean twang to appeal to western swing players and acclaimed country maestro pickers such as Buck Owens. However, throughout the intervening years, rougher-around-the-edges guitarists from Albert Collins and country hero Waylon Jennings to rockers including Bruce Springsteen, PJ Harvey and Keith Richards have all brought out its very dirtiest, meanest growls and hardest bites and snaps in their own ways.

If the Telecaster is that hardened, unpolished girl from the other side of the tracks who would throw a few punches to help you out in a bar fight, the Stratocaster is the refined young lady who gets to meet your mother when you bring her home for Sunday dinner. Its honor roll of celebrated songsmiths includes the likes of Stevie Ray Vaughan, Jimi Hendrix, Eric Clapton, Bonnie Raitt, David Gilmour and John Mayer. All with their own incomparable take on how to squeeze out incomparable soul from its sophisticated persona and well-rounded finishing touches.

Telecaster vs Stratocaster – The Verdict

The Telecaster vs Stratocaster battle comes down to where you are as a player and where you intend to go.

Beginners would do well to start out with the Telecaster. Yes, there’s plenty to say for the seductive allure of starting out with a mind open to a Stratocaster’s wealth of extra controls. At the same time, a Telecaster will leave you with no choice but to hone your chops learning the basics first without compensating for weak technique with sonic razzle-dazzle.

Rock players can’t really go wrong with either, but the Stratocaster’s toolkit speaks for itself. It’s an effusive, wide-ranging genre. Provided you’ve taken the time to get your feet soundly beneath you and your fingers thoroughly calloused building a technical foundation, you owe it to your development to explore the magic of tonal chemistry.

Finally, for pure versatility, it’s no contest: the Fender Stratocaster wins. The Telecaster has a deceptively extensive range. However, the Stratocaster explored game-changing electronics and daring hardware to the benefit of expanding its horizons beyond compare. In the end, to settle this Telecaster vs Stratocaster debate, it’s best to try the two guitars yourself and see what fits your needs best.