Vox Pathfinder 10: What Makes this Model so Popular? 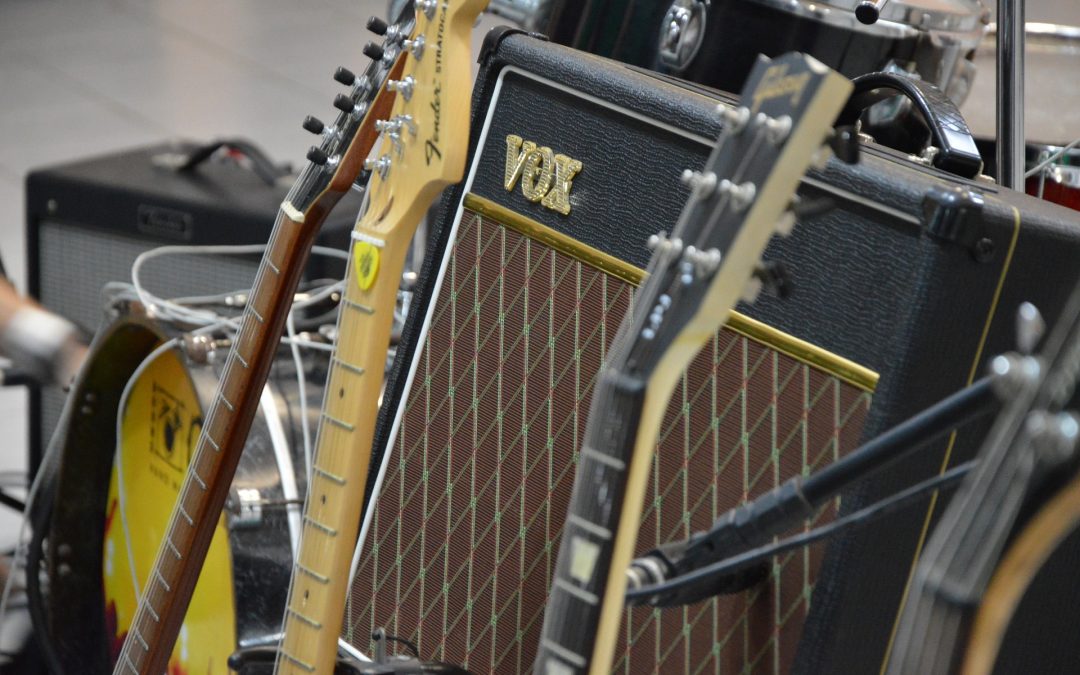 Looking for a practice amp that won’t break the bank, but don’t want to spend money a piece of junk? It’s harder than it sounds! There are dozens of models on the market, making it almost impossible to choose one amplifier without trying them all.

What about the Vox Pathfinder 10, is it worth the price? This article examines every feature of this amplifier and compares it to the competition to help you make the best buying decision possible.

What Is the Vox Pathfinder 10 and How Does It Work?

The Vox Pathfinder 10 is an amplifier designed for guitars. This model features a vintage appearance and sound, boasting ten watts and a series of knobs to refine the tone further. A handle on the top makes it easily portable, while legs on the bottom help protect the exterior from scratches.

Vox itself is a significant name in the industry, made famous by bands like the Beatles and The Rolling Stones. Since 1940, the company has produced hundreds of models for both personal and professional use. This model is smaller in size, making it excellent for the casual player and anyone playing in a small room.

What Makes the Vox Pathfinder 10 Unique?

Amplifiers are unique in their specs, features, and sound. Here is the overview of the Vox Pathfinder 10 specs:

While 10 watts might not be a lot in the realm of guitar amplifiers, the Pathfinder produces ample sound in smaller spaces. You can’t wow a stadium with it, but it is loud enough to annoy the neighbors. Due to its more diminutive stature, this model is best for casual use and more intimate gigs.

The 6.5-inch speaker takes up the majority of the face, making the most of the small space given on this amp. The cover looks like a vintage Vox, which adds extra appeal by diversifying itself from competing models. There is no mistaking the Pathfinder’s distinctive looks. You can also find this model with other speaker covers, like the Union Jack.

The gain knob allows you to increase the level of crunch, making this amp excellent for heavier play styles, while the overdrive switch lets you bring out your inner rock god for a solo or keep things sounding clean. With a two band EQ, you can further refine your tone by messing with the treble and bass.

There’s also a line out on this model that you can use with headphones or for recording purposes. Outputs like this one aren’t commonplace for amplifiers in this class, which makes this model even more appealing.

As for the sound, you can expect the usual bright and chime-like tones that Vox is known for. The Pathfinder is excellent for clean playing styles from folk to blues, but it can also handle an intense level of heaviness.

Turn up the gain, and you can go from crunchy blues to hard rock and back again. Lower the treble, and you can soften your sound for a lighter tone. Flick the overdrive switch, and you can take full advantage of the Pathfinder’s distortion. While it isn’t suited for heavy metal, you can jam away in hard rock stylings all day long.

Keep in mind that you don’t need an electric guitar to use this amp. It’s capabilities fully extend to an electro-acoustic, which can take full advantage of the clean sounding features on this Vox. The combo is one that many choose to use for smaller gigs.

Finally, this amp is a little larger than others in its class. The increased size allows for a larger speaker, which creates the big sound in this tiny amp, and it also enables Vox to add a few aesthetic features. With all of these features included, you’ll be surprised to know that this amp is considered a steal at its price.

You can find the Vox Pathfinder 10 for as little as $80 and as much as $120 online. That’s a massive difference when dealing with a small practice amp. So, what’s the real price?

If you plan on picking up this amplifier from Vox’s website, think again. While the company designs and creates speakers, they don’t sell them directly. Luckily, there are hundreds of certified third-party Vox retailers (like Guitar Center).

Brand new, this amp costs precisely $89.99 whether you pick up the original or the Union Jack model. That’s incredibly reasonable for a 10w amp from a major name brand. Given the included features and premium Vox sound, we think that a penny shy of $90 makes this model worth the price.

You can find used models ranging from as high as $79.19 to as low as $40 online as well. If you hunt around in the discount section at your local guitar shop or a website like eBay, you can probably find one for even cheaper.

We did notice several retailers selling the Pathfinder 10 for over $100, which is ridiculous. There’s no need to pay more than the initial $90, especially when that’s the price for a brand-new amp.

Finally, there’s a limited-edition Pathfinder 10 that’s wrapped in denim. This model costs $120 new and around $95 used. It looks great, but not nearly as classic as the original design.

Overall, customers are satisfied with the Vox Pathfinder. Some love it while others find that it is an excellent bargain. Out of all the reviews we read, it was rare to see anyone give this amp less than three stars.

Players raved about the impressive sound quality coming from the Vox Bulldog speaker, even with the gain or overdrive engaged. Those who enjoy playing clean loved the richness of the tone, while those who enjoy a heavier sound said the amp could handle a lot more than they initially thought.

Everyone agreed that this wasn’t the loudest amp out there, but most use it for playing in a single room of the house. As a practice amp, customers think this is an excellent buy for the features and price. Some users also found the larger size and weight to be something they liked.

On the downside, people did point out that there are limited features and a few cons to this amp. Several practice amps feature things like reverb and other effects, while the Pathfinder 10 keeps things incredibly simple. Several customers thought that the higher-end sound is the tradeoff for these features, while others didn’t need them for their playing style.

As for cons, there are a couple. First, the amp doesn’t get any louder after turning the gain up to about 75%. Anything higher continues to distort the sound, but most players felt as though the sound was too saturated at that point. While most enjoyed the overdrive and gain combo, they also pointed out that you can’t get into anything too heavy without adding a pedal.

Some users also wished it was a two-channel amp but admitted that was asking a lot of such a small model.  Almost everyone agreed that the 15R, the next model up from Vox, is the model to get if you want added effects and other features. 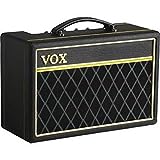 As a practice amp, the Vox Pathfinder 10 has plenty of competition. You can find 10-watt models across the internet from all sorts of brands, but Fender and Blackstar are the main competitors. Specifically, the Blackstar Fly3 and Fender Frontman 10g.

The Frontman 10g comes in at $60 with a half-inch smaller speaker and the same wattage. It features the same controls as the Pathfinder 10 for gain, overdrive, and EQ, as well as the same inputs and outputs.

It’s taller than it is wide and doesn’t have the same classic look that Vox offers. The sound is where things really begin to change, though. Fender focuses on clean, mid-range tone that pairs perfectly with their guitars. Like the Vox, the 10g isn’t designed to handle heavy metal.

The Fly 3 is battery powered, which may be a pro or con depending on your personal preference. For $65, you get all of the same features on both the Vox and Fender practice amps with a more modern look. However, this model only clocks in at three watts.

The speakers are three inches, making this one of the smallest practice amps in this tier, but the sound is comparably loud to the clean setting on the Pathfinder. The Fly3 offers one additional switch for a delay effect, which you can adjust to make the time in-between the delay shorter or longer.

While there’s plenty to like about Blackstar’s model, it can’t compete with the Vox in sound. Higher wattage isn’t the only thing that equates to a loud sound, but it does make a significant difference in the realm of amps.

We give the Vox Pathfinder 10 a solid four out of five stars. It’s an excellent practice amp, though we do see some room for improvement. Here’s how we came to that conclusion.

Vox is a classic, and their Pathfinder is designed to help you play with classic stylings. Whether you enjoy clean tones or the grittier sounds of rock and roll, this amp will deliver both in premium quality sound. By making a few adjustments via the controls, you can refine those tones as well.

For a 10-watt practice amp, the controls are exactly what we expect. Most models in this class feature simple EQ, gain, and overdrive features. While you can’t do a whole lot with those, they’re more than enough for practicing or learning how to play.

The addition of the line out jack for headphones and recording devices is a nice touch. With the right pedal setup, you could easily place amp next to a computer and record your own songs. Plus, the headphones come in handy when there are other people in your house.

We think that the Pathfinder 10 could benefit from a few extra features. Making it a two-channel model or adding additional built-in effects would make this amp a steal at the price while adding to its capabilities. Even a delay knob like the one on Blackstar’s model would be a welcomed addition. However, reverb would be the perfect addition to this amp’s classic sound.

Even without those features, this amplifier remains an excellent model for the price. Its sound is incredible for a tiny ten watt, it’s loud enough for practice, and you can refine your tone to get the perfect sound. Plus, it looks absolutely gorgeous.

Are there better amps out there? Sure, but you don’t need a wall of Marshall stacks when you’re practicing at home. For its purpose, the Vox Pathfinder 10 is an excellent choice.

Finding deals for this amplifier is trickier than you might think. Since the Pathfinder is sold from third-party retailers, you need to wait for one of them to have a sale on amps and hope that they include this model.

You could always look for a used model if you want to save some money. By purchasing used through a verified retailer, you can rest easy knowing that there are no defects or damage to worry about. Prices may be cheaper on a website like eBay, but make sure that the amp is in excellent condition before buying it.

We were unable to find any coupons for this amplifier on the sites we use for other products. That’s a little bit of a letdown, but musical gear isn’t something typically associated with coupons in the first place. One deal we did find was a $10 discount through Amazon Prime.