What Guitar Does Jack White Play? 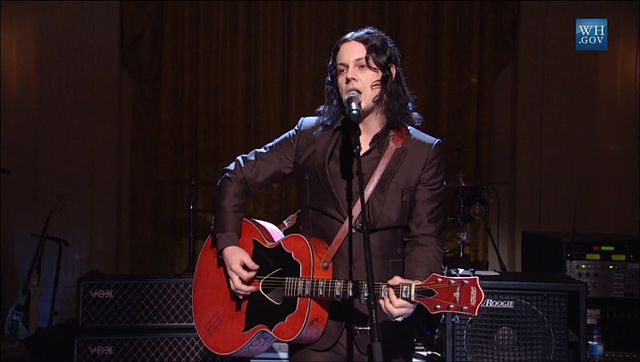 Jack White is one of the most well-known guitarists in modern rock today. While he has been involved in several bands and released solo albums, his most popular music was released while he was a member of The White Stripes.

In fact, you could make the argument that the riff from The White Stripes hit song, Seven Nation Army, is the most recognizable guitar riff from any modern rock band. The simple, unique sound of that song shows the power of a guitar in the right hands.

It only makes sense that many guitar players, especially people who grew up on music from Jack White, would want to emulate the equipment of one of the best modern rock guitarists.

So, what guitar does Jack White play? The answer to that isn’t exactly a short one.

For a great portion of his career, the “Jack White Guitar” was an Airline brand guitar. This was a unique choice that made him stand out on stage compared to other guitarists that chose more traditional options.

Airline guitars have never been known for their exceptional quality. What makes them popular is the vintage look and bright colors that are unlike most other guitars on the market.

Jack White has acknowledged the shortfalls of these guitars saying that playing one is more like getting into a fight.

Of course, that’s not to say that Airline makes bad guitars. They are good products but not on the level of what most professional musicians choose when hitting the stage.

Recently, Jack White has been playing some different guitars and people have taken notice. Gone is the old Airline guitar, replaced with models that are aimed at musicians looking for the best product available.

At almost $2,400 starting price, the Ernie Ball St. Vincent Signature guitar is substantially more than most Airline models that Jack White was playing previously. The craftsmanship put into this guitar is unbelievable and Jack White has clearly taken notice if he was willing to replace his iconic Airline guitar.

In addition to the Ernie Ball St. Vincent Signature guitar, Jack White has also been seen playing a Wolfgang Special at the advice of Eddie Van Halen. This guitar also comes in above $2,000 and is available in a number of bold colors.

Of course, the playability is most important and there are several interviews where Jack White raves about the Wolfgang Special. With the build quality that EVH is known for, this should come as no surprise.

In the early days of The White Stripes, Jack White could be seen playing a Gretsch Ranch Falcon acoustic guitar while on tour. This stunning white body guitar was chosen because of its ability to provide a bass-like sound, according to Jack.

Jack White also plays a Gibson L-1 acoustic guitar and you can see this in some of his television performances on various shows.

This acoustic guitar is a classic and an essential part of any collectors vault. While it may look like a typical acoustic guitar, the sound is anything but typical.

And Then There Were the Others

With a long, successful career like the one Jack White has enjoyed, artists are bound to play a number of different guitars. This is no different with Jack White.

In addition to the guitars mentioned above, Jack White has also been known to play Gretsch electric guitars including the Billy Bo model. The sharp lines and unique design fit the style Jack White has been working with his entire career.

Also, National Guitars have been a popular choice for Jack White at points in his career. While Airline guitars outnumber all other brands in his history, there is clearly some variety in Jack White’s choices.

If you want to play the same guitar as Jack White then you have a number of different brands and models to choose from. The major question is whether you are going for style or sound quality.

Both Jack White’s style and sound quality can be achieved but you will have to be willing to pay for some of the higher end guitars that he plays. While still reasonable, they are not as affordable as the budget Airline guitars Jack White is known for.

Of course, it’s not always about the equipment. The person behind the equipment has to have a passion for what they’re doing.